by: Alex Mahadevan Digital Editor YourObserver.com Neil deGrasse Tyson made one thing perfectly clear while speaking to a packed house at Van Wezel Performing Arts Hall Monday: Pluto is still not a planet. Get over it. “Just because I was an accessory in the demotion of Pluto, doesn’t mean I don’t love Pluto,” Tyson said […]

By Jessica Floum SARASOTA – Renowned scientist Dr. Neil deGrasse Tyson called Gov. Rick Scott’s ban on official use of the terms “climate change” and “global warming” astonishing and disappointing, and held voters responsible for electing Scott and other like-minded politicians to office. “I thought as a nation we were better than this,” Tyson said. […] 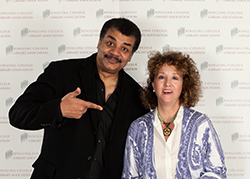